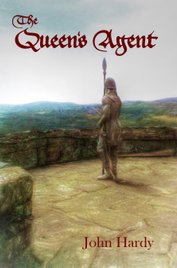 ‘The Queen’s Agent’ is available as both a paperback and EBook from Amazon, for more details click here.

This latest book is my first full length novel and is a historical spy story set at the time of Elizabeth I during the build up of the Spanish Armada. The story is set in London, Santiago de Compostela and along the Pilgrim’s Way, as well as France and the Low Countries. The politics of the time and Walsingham’s spy network, and the hunt for a mole within it, are interwoven with the search of an illegitimate son for his father.

The idea of combining the political and religious intrigues that led up to the first Spanish Armada, Walsingham’s spy network and the Camino de Compostela first came to me as I walked on the Pilgrims’ Way between Estella and Los Arcos in Navarra in 1998.

The trail of peregrinos, pilgrims, to and from Santiago de Compostela was as real in the time of Elizabeth I as it is now. Those travelling from England then included those of both a Catholic and a Protestant inclination. Sir Walter Raleigh, for instance, not a noted Catholic, and who carried out a relentless campaign against the Spain of Felipe, expressed a wish to go on a ‘Compostela’.

I had read much about the time leading up to the first Armada as well as the actual sailing. The politics in England and Spain are both fascinating and tortuous, especially the relationship and interplay between Felipe and Elizabeth.

Walsingham and his network of spies, code breakers and priest hunters had also long interested me, as had his band of ‘Royal messengers’. These men, and all countries had them, rode all over Europe taking messages between rulers and had immunity from harm from their countries’ enemies, even in times of war. (Is this where the saying ‘don’t shoot the messenger’ comes from?) It was by using such methods that monarchs, bishops and the Pope could send each other requests, ultimatums and so on. These messengers only had to fear brigands, irregulars and other non state rogue activists. As I walked the Camino, I began to weave these three strands together in the outline of a novel. By the time I reached Santiago de Compostela, I had the outline of the story in my head. I had only to write it. This has taken many years to do!